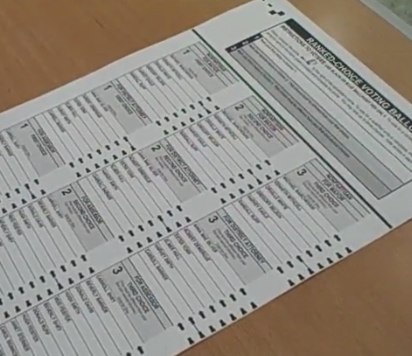 I had BIG questions. What were local governments offering on their websites, and how did they talk about it? And, what questions did voters have?  Finally, if voters went to local government websites, were they able to find out what they needed to know? END_OF_DOCUMENT_TOKEN_TO_BE_REPLACED

When I say “usability test,” you might think of something that looks like a psych experiment, without the electrodes (although I’m sure those are coming as teams think that measuring biometrics will help them understand users’ experiences). Anyway, you probably visualize a lab of some kind, with a user in one room and a researcher in another, watching either through a glass or a monitor.

It can be like that, but it doesn’t have to. In fact, I’d argue that for early designs it shouldn’t be like that at all. Instead, usability testing should be done wherever and whenever users normally do the tasks they’re trying to do with a design.

Usability testing: A great tool
It’s only one technique in the toolbox, but in doing usability testing, teams get crisp, detailed snapshots about user behavior and performance. As a bonus, gathering data from users through observing them do tasks can resolve conflict within a design team or assist in decision-making. The whole point is to inform the design decisions that teams are making already.

That test plan/design? It can be a series of lists or a table. It doesn’t have to be a long exposition. As long as the result is something that everyone on the team understands and can agree to, you have written enough. After that, improvising is encouraged.

The individual sessions should be short and focused on only one or two narrow issues to explore.

But why bother to do such a quick, informal test?
First, doing any sort of usability test is good for getting input from users. The act of doing it gets the team one step closer to supporting usable design. Next, usability testing can be a great vehicle for getting the whole team excited about gathering user data. There is nothing like seeing a user use your design without intervention.

Most of the value in doing testing – let’s say about 70% – comes from just watching someone use a design. Another valuable aspect is the team working together to prepare for a usability test. That is, thinking about what Big Question they want answered and how to answer it. When those two acts align, having the team discuss together what happened in the sessions just comes naturally.

When not to do testing in the wild: Hard problems or validation
This technique is great for proving concepts or exploring issues in formative designs. It is not the right tool if the team is facing subtle, nuanced, or difficult questions to answer. In those cases, it’s best to go with more rigor and a test design that puts controls on the many possible variables.

Why? Well, in a quick, ad hoc test in the wild, the sample of participants may be too small. If you have seized a particular opportunity (say, with a seatmate on an airplane or a bus, as I have been known to do – yeah, you really don’t want me to sit next to you on a cross-country flight), a sample of one may not be enough to instill confidence with the rest of the team.

It might also happen, because the team is still forming ideas, that the approach in conducting sessions is not consistent from session to session. When that goes on, it isn’t bad necessarily. It can just mean that it’s difficult to draw meaningful inferences about what the usability problems are and how to remedy them.

If the team is okay with all that and ready to say, “let’s just do it!” to usability testing in the wild, then you can just do more sessions.

So, there are tradeoffs
What might a team have to consider in doing quick, ad hoc tests in the wild rather than a larger, more formal usability test? If you’re in the right spot in a design, for me doing usability testing in the wild is a total win:

Usability testing at its essence: something, someone, and somewhere
Just a design, a person who is like the user, and an appropriate place – these are all a team needs to gather data to inform their early designs. I’ve seen teams whip together a test plan and design in an hour and then send a couple of team members to go round up participants in a public place (cafes, trade shows, sporting events, lobbies, food courts). Two other team members conduct 15- to 20-minute sessions. After a few short sessions, the team debriefs about what they saw and heard, which makes it simple to agree on a design direction.

It’s about seizing opportunity
There’s huge value in observing users use a design that is early in its formation. Because it’s so cheap, and so quick, there’s little risk of making a mistake in making inferences from the observations because a team can compensate for any shortcomings of the informality of the format by doing more testing – either more sessions, or another round of testing as follow-up. See a space or time and use it. It only takes four simple steps.

The team I was working with wanted to find out whether a prototype they had designed for a new intranet worked for users. Their new design was a radical change from the site that had been in place for five years and in use by 8,000 users. Going to this new design was a big risk. What if users didn’t like it? Worse, what if they couldn’t use it?

We went on tour. Not to show the prototype, but to test it. Leading up to this moment we had done heaps of user research: stakeholder interviews, field observations (ethnography, contextual inquiry – pick your favorite name), card sorting, taxonomy testing. We learned amazing things, and as our talented interaction designer started translating all that into wireframes, we got pressure to show them. We knew what we were doing. But we wanted to be sure. So we made the wireframes clickable and strung them together to make them feel like they were doing something. And then we asked (among other things): END_OF_DOCUMENT_TOKEN_TO_BE_REPLACED

In a clear and thoughtful article in the May 3, 2007 Journal of Usability Studies (JUS) put out by the Usability Professionals’ Association, Rich Macefield blasts the popular myths around the legendary Hawthorne effect. He goes on to explain very specifically how no interpretation of the Hawthorne effect applies to usability testing.

Popular myth – and Mayo’s (1933) original conclusion – says that human subjects in any kind of research will perform better just because they’re aware they’re being studied.

Why it doesn’t apply to usability tests

What about feedback and learning effects?

We want feedback to be part of a good user interface, don’t we? Yes. And we want people to learn from using an interface, don’t we? Again, yes. But, as Macefield says, let’s make sure that all the feedback and learning from a usability test comes from the UI and not the researcher/moderator. Instead, get to the cause of problems from qualitative data such as the verbal protocol from participants’ thinking aloud to see how they’re thinking about the problem.

Look at effects across tasks or functions

Macefield suggests that if you’re getting grief, add a control group to compare against and then look at performance across tasks. For example, you might expect that the test group (using an “improved” UI) would be more efficient or effective in all elements of a test than a control group. But it’s possible that the test group did better on one task but both groups had a similar level of problems on a different task. If this happens, it is unlikely that the moderator has given feedback or prompted learning to create the effect of improved performance because the effect should be global across tasks across groups.

Macefield closes the article with a couple of pages that could be a lesson out of Defense Against the Dark Arts, setting out very specific ways to argue against any assertion that your findings might be “contaminated.” But don’t just zoom to the end of the piece. The value of the article is in knowing the whole story.

I get a lot of clients who are in a hurry. They get to a point in their product cycle that they’re supposed to have done some usability activity to exit the development phase they are in and now find they have to scramble to pull it together. How long can it take to arrange and execute a discount usability test, anyway?

Well, to do a usability test right, it does take a few steps. How much time those steps take depends on your situation. Every step in the process is useful.

Notice that “develop a test plan” and “prepare test materials” are different steps.

It might seem like a shortcut to go directly to scripting the test session without designing the test. But the test plan is a necessary step.
Test plan or test design?
There’s a planning aspect to this deliverable. Why are you testing? Where will you test? What are the basic characteristics of the participants? What’s the timing for the test? For the tasks? What other logistics are involved in making this particular test happen? Do you need bogus data to play with, userids, or other props?

To some of us, a test design would be about experiment design. Will you test a hypothesis or is this an exploratory test? What are your research questions? What task scenarios will get you to the answers? Will you compare anything? If so, is it between subjects or within subjects? Will the moderator sit in the testing room or not? What data will you collect and what are you measuring?

It all goes together.

Why not just script the session without writing a plan?
Having a plan that you’ve thought through is always useful. You can use the test plan to get buy-in from stakeholders, too. As a representation of what the study will be, it’s understanding the blueprints and renderings before you give the building contractor approval to start building.

With a test plan, you also have a tool for documenting requirements (a frozen test environment, anyone?) for the test and a set of unambiguous details that define the scope of the test. Here, in a test plan, you define the approach to the research questions. In a session script, you operationalize the research questions. Writing a test plan helps you know what you’re going to collect data about and what you’re going to report on, as well as what the general content of the report will be.
Writing a test plan (or design, or whatever you want to call it) will give you a framework for the test in which a session script will fit. All the other deliverables of a usability test stem from the test plan. If you don’t have a plan, you risk using inappropriate participants and getting unreliable data.